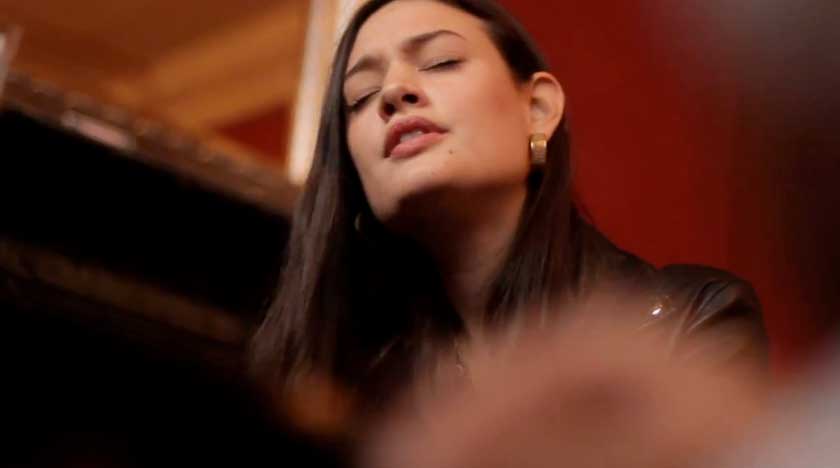 I thought The Staves were going to be a bunch of lads with mullets. I heard this comment in a pub about them one night, how they were so funny, such rockers, and so ‘dirty’ on stage. My only impression. So it had been arranged that I was going to meet Fionn Regan in The Workmans Club one rainy morning and that The Staves would join him. The shoot started early, 10pm. Fionn was there when I turned up, never met the man before, quiet lad.. polite and courteous. There was no sign of the Staves lads. I was kinda dreading them to be honest. I was told they had just supported someone in The Olympia the night before, so was expecting three hungover smelly blokes with mullets who had no interest at all in being there. I hated filming musicians that had no interest, or treated me like a camera operator, in this case a Morning AM camera operator. There was a knock on the door, I went to open it and to my surprise standing there were three smiling beautiful women “You’re Myles?” they all said in unison, I was like, “*ahmem, and your the Staves???”. I wasn’t prepared, my heart then tried to run away from my body. I didn’t do my research. The light, the angles, who sang what when, oh god, they were all going to sing together??! The result is possibly my shakiest camera work ever. Ireland AM wouldn’t even have me. My nerves didn’t subside until after the shoot and I went home to immediately edit the yoke.

I’m really happy everyone liked the video and have since had a few more gigs filming the lads. Sound blokes.

0 comments on “Fionn Regan and The Staves :: North Star Lover”

Seamus broke his wee leg.
Laura and the ash.